Weekly update from Rev Chris for 15th & 22nd May

Dear all,
Thank you for your patience as there was a break in these weekly updates whilst I was off walking a pilgrimage route, from Chester Cathedral to Lichfield Cathedral, called the Two Saints Way. As a route it was opened in 2012 in dedication to St Werburgh (Chester) and St Chad (Lichfield). Both lived in the 7th century and were instrumental in bringing Christianity to the Anglo-Saxon kingdom of Mercia (what we now call the midlands) that was one of three kingdoms that developed in the post-Roman era. 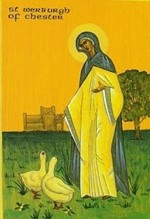 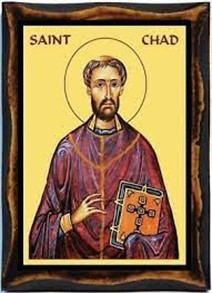 It was fascinating following the trail as it weaved its way along various canals side paths such as the Shropshire Union Canal and the Trent & Mersey Canal and the ancient stories of those saints merged into more modern stories of the development of these waterways and their importance as trade routes, not least the pottery industry of the 18th century and notable characters such Josiah Wedgwood, who’s grave and memorial we found on the south side of Stoke.
How society changes over the years with the nature of industry, employment, and sociological development. What will be said of our times and in what direction will things go from here? I find such questions fascinating as I wonder what sort of world future generations will inhabit. I cannot know the answer to these things and can only relate to the here and now – there is a wonderful line in one of the Lord of the Rings films when Gandalf, the wizard, says to Frodo, the hobbit “All you have to decide is what to do with the time that is given to you”.
It reminds me of a passage from the bible in the book of Esther from the Old Testament. The character of Esther lives in exile, with her fellow Jews, under Persian rule. The people are under threat, but Esther has a chance to prevent their destruction, but she hesitates as she will be in great danger – her mentor, Mordecai, then says “For if you remain silent at this time, relief and deliverance for the Jews will arise from another place, but you and your father’s family will perish. And who knows but that you have come to your royal position for a time such as this?”
St Werburgh and St Chad were of their time and did what they needed to do to make apparent the good news of Jesus Christ. We are of our time, and we do what we can in the world as it is now knowing that we are each called for “a time such as this”.
Blessings,
Rev Chris

p.s.
Whilst I was away the sad news came to me that John Tester had died. John had become a treasured part of our congregation at St Nicholas Church and our thoughts and prayers go out to his wife Daphne, and all the family, at this time. His funeral will be on Tuesday 31st May, 11.45am, at Vinter’s Park Crematorium.
p.p.s.
RECEIVING COMMUNION
As previously advised, we will be returning to communion in two kinds (wafer & wine) as of the 5th June. The Church of England have also now issued guidance on this that essentially says that they see no reason why we cannot now re-commence communion in both kinds.
The following options will be available for communicants;

1) Drink wine from the chalice as had been the case pre-pandemic.
2) Continue to receive just the wafer.
3) Intinction (dipping) of wafer in the wine. Previously I have said that communicants can do this with the wafer they have been given – however the Church of England does not recommend this course of action therefore if ‘intinction’ is the preferred method of receiving then the priest will intinct the wafer before passing it to the communicant. The logistics of how this takes place will be communicated during the service.

All of these are full and sufficient means of receiving Holy Communion and, hopefully, meet the needs of all concerned. This has been a difficult period in the life of the church, and we are working to make everything as normal as possible as we fully appreciate that communion is a significant place of encounter with Jesus.