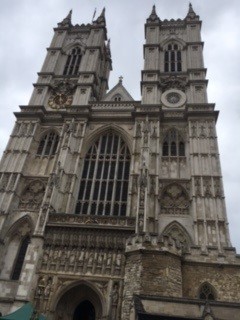 It’s that time of year again when JAHFA  (the St Nics youth group) go on their annual Pilgrimage – previous Pilgrimages have been to Canterbury Cathedral, Rochester Cathedral, St Leonards church, Hythe and the Bruderhof community just outside Nonington . On Tuesday morning we set off for this year’s Pilgrimage to London and Westminster Abbey!

We were met at the West door to the Abbey by Canon Hawkey who set the tone for our visit by welcoming us as pilgrims, although we hadn’t walked that far from the train station (and some of us – Rev Chris, had slept the whole journey there!) and explaining the significance of the 12 figures above the main door who were all 20th century Christian Martyrs from all over the world, signifying that the Abbey was open to everyone.  We then had our own private guide to whisk us through roped off areas and into special areas not seen by the general public – we felt very important! We were allowed to sit in the Quire seats and just reflect a bit on the space and take in the important events that had taken place here. There is so much to see and so many plaques, graves and memorials to Royalty and famous people, all packed into a relatively small space – it’s a lot to take in! With all the busyness and amounts of people constantly coming and going it’s easy to forget that when the monks were granted the land to found the first monastery here in  970, it was a remote quiet island, ideal for contemplation! The quietest place on the main floor was in the shrine of Edward the Confessor where there were little niches to kneel in and pray, which shut out the hustle and bustle going on around. 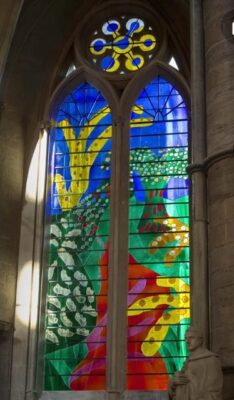 We saw the window designed by David Hockney which represents the Queen’s love of the countryside – unusually the glass isn’t painted as you would expect with stained glass but was made in those particular colours, I’ll leave you to decide what you make of it? We went into the beautiful Lady Chapel with an amazing ceiling, where the seats of the Knights of Bath are (so called because of the bath they took before the ceremony!) and Lady Zoe (giraffe) and Lady Faye(flamingo) were dubbed! Then it was lunchtime, after lighting a candle and a few minutes of silent reflection and a visit to the Coronation Chair (with it’s missing Stone of Scone). We had our lunch in the Cloisters which had some very interesting modern memorials to units and organisations including The Old Contemptibles, GCHQ and MI5 . After lunch we explored on our own and found the Chapter House, the Pyx Chapel (the oldest part of the Abbey) before meeting up with our guide to be taken up to the recently opened Queen’s Diamond Jubilee Galleries. 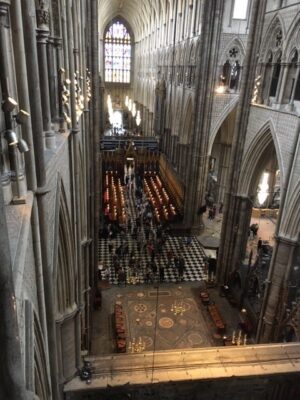 This space was amazing and very quiet and peaceful compared to downstairs – it gave a great view of all the things we had seen at ground level and a better sense of the space and its timeless qualities.  There were some interesting items on display including one of the 24 copies of the Magna Carta, various charters giving the monks the right to the land and saying that they could operate independently of the Archbishop of Canterbury and take their orders directly from the Pope! However, the most remarkable item was a painting to celebrate the Queen’s Diamond Jubilee of an imagined scene of her standing by the Cosmati Pavement (the place by the high altar where the Coronations take place) pensively reflecting. It was good to get away from all the people and absorb the atmosphere in this ancient building.

That finished our time at the Abbey, we had seen and learned so many contrasting things in our trip, I think we’ll have to go back again some time!