Dear all,
We are all waiting to see what happens on the 21st June and how that will affect services after that date. Should all restrictions cease, and we can sing again then my hope is that the service on the 27th June, at St Nicholas, will involve a lot of singing – we will have to wait and see.
In the meantime, there will be services as per the attached diary – please note that for the 20th June 10am Oasis Service Fiona will provide an online service but there will also be an outside ‘Parade’ service, around the back of church, with the uniform groups. Can I encourage people to book in and support that service – the weather looks good, and you can sing!
You will see that the Services & Events diary only goes up to the end of June at present as I wait to see how things work out, although, as mentioned last week, the Morning Worship team, at St Nicholas, are intending to be back in the church on the first Sunday of July (but still with an online offering).
There isn’t going to be a weekly update next week as I am going to be away, so the next one will be on 25th June when I should know more about the way forward.
My time away will be walking a pilgrimage route from Melrose, on the Scottish borders, to Holy Island in Northumberland. The pilgrimage is dedicated to St Cuthbert who was an Anglo-Saxon saint in the tradition of Celtic Christianity. He was born in 634AD and grew up near Old Melrose Abbey and went on to become a monk after a heavenly vision. He eventually became prior at Melrose and then later prior to Lindisfarne (Holy Island). In 684 he became Bishop of Lindisfarne but later resigned to live life as a hermit. He died in 687AD. 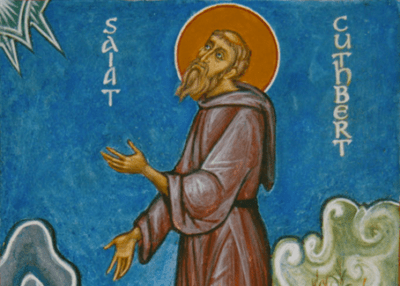 Cuthbert is one of the major figures in the legacy of Celtic Christianity that is still very much alive in parts of the country, particularly the north of England, and Scotland, at places like Holy Island and Iona. It has a history of development that was separate to the Roman Catholic Church and was less authoritarian and more spiritual with a greater connection to the natural world.
I am sure I can bore you all rigid with more information when I return.
Blessings,
Rev Chris